I cut my hair short two weeks ago. In the hair world, we call it “The Big Chop.” In the movies, when a woman gets the big chop, the independent-woman-pop-ballad kicks off, and our heroine Katie (or Rachel or Lisa) struts out of the hair parlor with a tangible sense of empowerment. She’s starting over, leaving the old locks behind like broken chains of a former life.

But I’ve cut my hair short before, thinking it would signal some dramatic change in my life. Big alterations are supposed to announce a new season, right?

The Lengths We Go 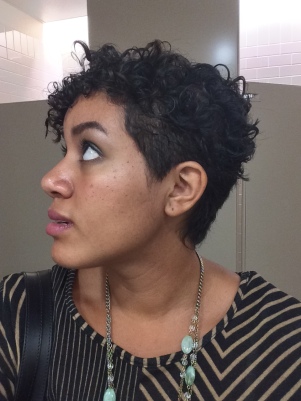 The last time I cut my hair short, it was my final year of grad school, and I was tired of myself. To clarify, I was tired of myself not changing quickly enough. I had come out of college with long curls newly freed (thanks Natural Hair Movement!) and a ton of expectations as to what the next 5 years would bring. The racial injustice in my country angered me, and I wanted to jump right into ministry to engage it. I also thought I would finally start writing the book I had wanted to publish since I was twelve. I thought I would date and get into a long-term relationship by at least 24, married by 28. I thought I would finally lose all the self-consciousness that stutters my ability to assert myself in large groups and speak up. I thought I would always be on the ground and in-action.

But instead of being in-action… I felt inactive–inert. I had this list of all the things I wanted to be and do before I was 30, but as I kept struggling just to finish things I started and overcome my fears, I thought I was just stuck, standing still, and that equated to failure in my book. When I looked at myself, all I could see were the things I wasn’t doing. I wasn’t writing enough. I wasn’t getting connected to my neighborhood. I wasn’t being a good enough friend. I wasn’t taking professional leaps at work. I wasn’t staying on top of what was going on with the world.

I shaved away my grown-out college curls and made it my “See that!” moment, the last-ditch lash-out of a woman who believed it would symbolize my emergence into someone new, better. I thought: Now I’ll do better. I’ll just DO more.

Cutting my hair was supposed to galvanize me to move past my old insecurities, pave my way to Real Adulthood, but many times we expect certain results from things that were never meant to satisfy us. They give us the illusion that we are taking control of our lives, making changes on our terms, but if we haven’t dealt with the lies we believe about ourselves at the roots, our actions on the outside will never reflect any essential shift in the soul.

It’s like when I went on a hair-dyeing rampage this past spring, obsessed with getting my hair purple. At first I did the research, carefully measuring out and applying coconut oil to my curls before the dyeing process so I wouldn’t screw up their texture. I slept with the oil in my hair overnight, slowly brushed the dye on the next day, and then waited several more hours for it to take hold. The first attempt lightened my hair a bit, added little a tint, but I didn’t get the results I wanted…so I sped the process up.

I bought a bunch of products and tried again, this time with a cupful of bleach and barely two days in-between for my hair to recover from the first job. I swiped on the dye, and even as I stood waiting for it to take hold, I felt tears burning in my eyes, and I didn’t know why.

An hour later found me with the top half of my hair overly bright and slightly fried. When I washed and dried my hair out, those strands stuck limply to my forehead, unable to curl in the ways they used to. Unwilling to concede defeat, I used color remover, protein fillers (I learned A LOT about the precise science of hair that week), and dyed my hair 3 more times, each attempt desperately trying to cover the mistakes made in the previous one. The result: a mismatched mop of hair and a swell of frustration almost to the point of boiling over.

I tried to impose my will on my hair and force it into something it wasn’t ready for.

When we strive to generate change in ourselves solely by our own willpower, we tend to also blame ourselves when we constantly fall short–and we will fall short. A child insecure of their identity will try to validate themselves with whatever means under their control since they believe they have something to prove. I saw it in the kids I used to mentor at a Bronx elementary school when they stomped around the playground pushing other kids or trussed up in the latest sneaks to solidify their status as someone worthy to own that space.

A child secure in who they are is not preoccupied with all that because they know they’ve already been proved worthy of value. Anything outside of that is a lie.

When I was a child, I accepted Jesus as my Savior, believing that he loved me and had a future for me. But in the times in my life when I lose sight of that basic truth, I get trapped in this vicious cycle of trying to fix all my problem areas right away, tackle all the things I think I’m supposed to do, and then when I mess up again, I tell God, “I’ll do it better next time.” Every turn of the cycle is another dye job, another layer of color masking a deeper heart issue. Even trying to just cut out everything unhealthy in my life doesn’t sustain any meaningful change if it’s reduced to just another to-do list, another way to fail and feel ashamed for failing. It’s like cutting off all your hair but still feeling the weight of it on your back.

While in this mode, each attempt to drive myself forward reveals my lack of trust in God. It reveals that in that moment I don’t believe that:

a) he loves me

b) he has a future for me

We focus so often only on what is visible that we mistake periods of slowness or stillness or even struggle in our lives as evidence for our lack of growth. Because we’re not There-where we want to be-it means nothing must be happening Here–where we are. But God has been challenging me lately with the radical idea that maybe the reason I’m not There now is because I’m not ready to go There yet. Maybe there are some steps and some time I need to get There. Maybe there’s change and healing he’s working out in me that will prepare me for what’s to come later. Maybe I’m not even supposed to go There, and God actually has something far better for me.

This idea tosses out the old scale I measured my life by because not only does it mean that there is no one-size-fits-all pace to life, it also means that there are no benchmarks you’re supposed to reach by a certain age. It frees me to just keep moving through each day with anticipation instead of a crushing sense of pressure. Even if I’m still struggling to write just one blog post or taking longer than expected to figure out my next steps professionally or navigating singleness in my late twenties, or even if it feels like nothing in my life is changing outwardly right now, it doesn’t mean that I’m not growing and moving towards the opportunities God has for me, opportunities to bless me and also enable me to be a blessing to others. There is no need for me to rush, and I have nothing to prove.

If salvation is the “starting over,” the Big Chop where our past mistakes no longer ultimately define who we are, then all life after that is a series of little cuts, shaping us slowly towards becoming people who revel in the freedom God has given us and live abundantly out of it.

The Lengths We Grow

I admit, when I cut my hair two weeks ago, there was part of me that still believed it would give me the extra oomph to drastically change parts of my life. I watched chunks of dyed, fried hair drop to the ground and equated it to me moving on to a new season. But taking the time to reflect on this more has made me realize that I can’t depend on just one action, one human being to determine my future. But one action can echo the rhythms of a deeper, ongoing shift. This is not me starting over–this is me continuing on and trusting that God’s got me even if I’m unsure of where I’m going next.

There’s a difference between trying to cut off everything as if it never happened-as if our mistakes and failures and stops and starts were never part of our story-and continuing life from a new point of reference. The first approach is based in shame, in trying to erase the past, and that only stifles our ability to grow and change. The second orientation points us back to our roots, to God who loves us and will guide and clarify our next steps.

The hair growing from my scalp now is brand new, has never been touched by dye or bleach, but it’s benefiting from a internal journey months in the making. We don’t cut our hair to start over. We cut it to leave space for new growth.

Finding the motivation to write (and finish!) this post after 4 months on hiatus was tough. It’s hard pushing through the tension and resistance in your own heart to just take another step forward. But I’ve found that with a lot of prayer and love, the fruit of that labor is always worth it, even if I can’t see it in the moment. So this post is dedicated to my friends who may also be in this season of just trying to muddle through and figure out their next steps. The world tells us what we should be doing at this point in our lives, but don’t let those voices drag you down or make you feel lesser. You’re where you need to be, and God’s got you.

6 thoughts on “the lengths we grow”

© Joanna Chin and graceriot, 2018. Unauthorized use and/or duplication of this material without express and written permission from this site’s author and/or owner is strictly prohibited. Excerpts and links may be used, provided that full and clear credit is given to Joanna Chin and graceriot with appropriate and specific direction to the original content.